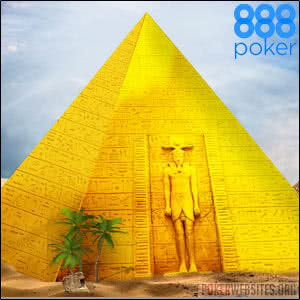 Starting today, 888Poker is giving away up to $1 million in cash prizes and other goodies to players who participate in the site´s Golden Pyramids promotion.

For the next couple of months it could be worth your while to spend some time playing at 888Poker. The site has just released details of its Golden Pyramids promotion – a promotion that offers players the chance to share in up to $1 million in cash prizes, free casino plays, free sports bets and 600,000 Gold Tokens that can be redeemed for more cash, bonuses and tournament entries in the 888 Poker Club.

The promotion starts today and runs until July 30th, during which time players will be invited to qualify for up to seven daily freeroll tournaments and a weekly freeroll final paying out a total of $640,000 in cash prizes. Players are also being invited to spin the “Wheel of Ra” each day in order to add extra value to what already promises to be a potentially lucrative promotion.

The Four Tiers of the Golden Pyramid

The Golden Pyramid consists of four tiers – each tier representing a freeroll tournament of an ascending value. Players can start at the lower tier and work their way up towards the weekly final, or fast-track their climb up the pyramid by completing a range of progressively difficult challenges or winning a seat via the “Wheel of Ra” promotion. The four tiers are:

Once players have responded to the email from 888Poker and played in one Pharaoh Tournament, they can win extra seats in the Pharaoh, Sphinx and Tutankhamun Tournaments by completing up to four Daily Challenges each day. The Daily Challenges consist of winning BLAST games, winning hands at the cash game tables, placing casino bets or Live Sports bets. The challenges get harder according to the value of the Golden Pyramid Tournament:

To receive an extra Pharaoh Ticket you have to win one BLAST game with a minimum buy-in of $1.00, win ten NL Hold´em cash game hands at stakes of $0.02/$0.05 or higher (heads-up excluded), place five bets of $1.00 or more at the casino (certain games are excluded from the Daily Challenges) or stake a minimum of $5.00 on a Live Sports bet.

Players who complete their Daily Challenges will receive their entry tickets within 72 hours, but please note they only have a shelf life of 48 hours once issued. The good news is that players who win multiple seats in the Rameses Tournaments – the weekly finals – can save them up for following weeks. These will not expire until after the last weekly final on July 30th.

The Wheel of Ra and Cleopatra Tournaments 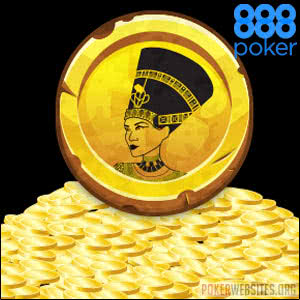 Real money players at 888Poker will be invited to spin the “Wheel of Ra” when they first log into their 888Poker account each day, and will be eligible for a second spin if they log into their account via the 888Poker mobile app after 5:00pm. The wheel offers various prizes from Golden Pyramid tournament tickets to casino freeplays and free sports bets. Over the course of the promotion the site will be giving away more than $250,000 in “Wheel of Ra” prizes.

The balance of the $1 million prize pool for the promotion will be distributed in Gold Tokens via special “Cleopatra Tournaments”. Three daily Golden Pyramid Tournaments will be selected at random each week to be “Cleopatra Tournaments” (one from each of the three lower tiers), and the top one hundred players in each specially-selected event will be awarded 2,000 Gold Tokens. These can be redeemed in the 888Poker Club for $20.00 cash or general tournament tickets.

To get the maximum out of the Golden Pyramid promotion, it is ideal to log into your 888Poker account every day. Even if you cannot play in specific Golden Pyramid tournaments, you could still pick up casino freeplays and free sports bets, and who knows what you might win by taking advantage of just these elements of the promotion? To find out more, and to start your ascent up the Golden Pyramid, visit 888Poker today.